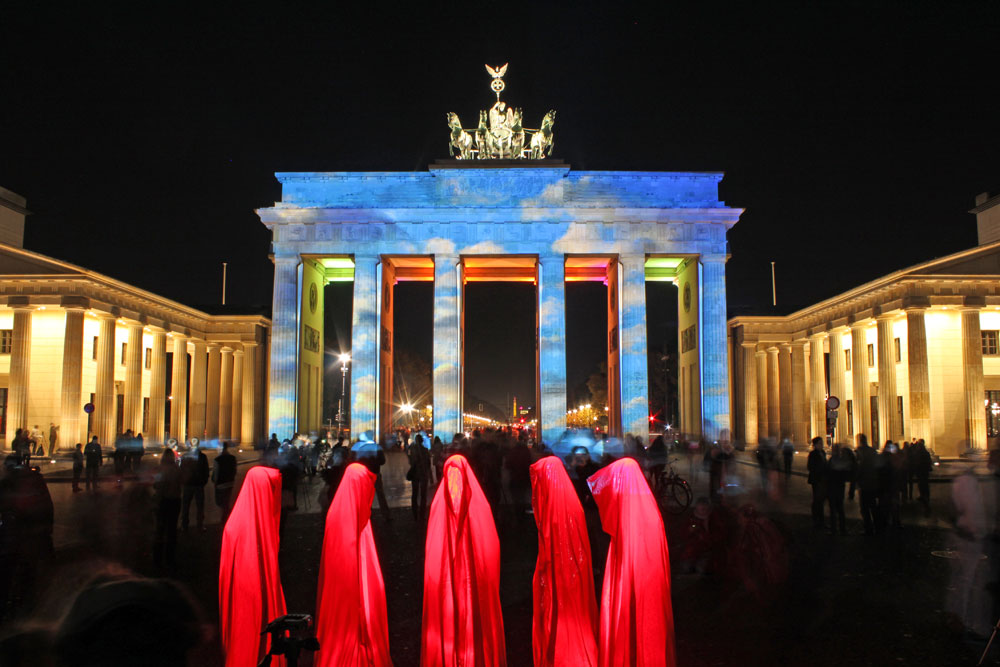 ‚Time Guardians‘ Visit Berlin Festival of Lights
The ‚Time Guardians‘ are five mystical sculptures who are traveling the worlds’ museums and exhibitions. Exclusively for the Festival of Lights, they made their journey to the German capital. Each night they show up on a different spot in Berlin. This unique light project is created by Manfred Kielnhofer, featured in EYESIN(TM) Magazine, Issue 9.
The Time Guardians by Manfred Kielnhofer
„In the ages of the ancient advanced civilizations the presence of the Guardians of Time was recognized with respect, reverence and humility. Over the millennia a new mystery was formed and only a few chosen ones, like high priests, spiritual masters and shamans were granted to study it. They were the ones that got a deeper insight in the secret of THE TIME GUARDIANS. The beings were referred to as visitors from other systems, protectors or destroyers and even gods.
Until today the true task and their continuous working in our world cannot be explained completely. An almost impenetrable veil lies over the reason and the working of their presence and the secret of their worldwide and unexpected appearance. Historians and experts in new fields of science assume that the emerging of the Time Guardians is connected to warnings and control visits, respectively corrective actions. According to ancient scriptures it is “the time travelers” that find out the GOOD – BAD status of our actions and the recent condition of our planet to correct and restore it. What actions there are that protect the collective harmony is mostly still in the field of speculation; moreover that knowledge is beyond our understanding and human perception.

To tell the exact appearance of the beings in space and time is hardly possible. And so far there is no reliable and working method to withdraw from the power and the non-worldly access of the GUARDIANS. Just like system operators they examine and watch over the individual as well as tendencies in social development and the global situation. Eyewitness accounts from various ages in history report of disappearances of people and radical changes in behavioural patterns of individuals. Like that especially people of great influence to society, like leaders of tribes or countries, triggered crucial global changes. The phenomenon was studied by the leading historians, sociologists, scientists of outer limits of knowledge and (para-)psychologists of all times but they found hardly any satisfying results. One general accepted theory is that our own motivation and the human actions themselves are the trigger for the working of the GUARDIANS. Through time they enter our world and always remain present to take record of our actions. Nobody can withdraw from their universal and objective valuations and guidance.“
-from The Guardians of Time. A report by Ron Morisson. Sound installations and texts by Thomas Nordwest. Sculptures by Manfred Kielnhofer.

About Manfred Kielnhofer
Manfred Kielnhofer was born in Haslach an der Mühl, Austria. He currently lives and works in Linz, Austria where he opened the gallery ‚Art Park‘ in 2005. Kielnhofer is self-taught and his work spans the mediums of painting, film, photography, installation, performance and sculpture.
Kielnhofer’s work is predominantly concerned with the human figure, and its various forms and movements. The figure is an integral part of his work, and he often uses the human form as a tool, either in place of a canvas, or in a collaboration to produce large-scale installations or performances.
Kielnhofer has exhibited widely throughout Austria and his work has recently been featured in exhibitions in New York and Miami. Kielnhofer’s Timeguards represent the first of his works to be exhibited in the UK.
Manfred Kielnhofer’s Timeguards, the Foundation’s newest arrivals, cut imposing figures in the Cass Sculpture Foundation’s woodland setting. This sinister group evokes many genres, from fantasy to mythology and the gothic, as a result of their sombre, shrouded forms. These necromantic figures, based upon the ancient theme of the ‚time guardian,‘ depict beings from another realm who, in ancient cultures and civilisations, would have been deemed responsible for paranormal goings-on.
The human form is central to Kielnhofer’s artistic practice. He is preoccupied with the body’s various forms and movements which he appropriates through a number of mediums, from canvas to installations and performance works. Kielnhofer’s work has been exhibited throughout his native Austria and has featured in exhibitions in New York and Miami. Timeguards represents Kielnhofer’s sculptural debut in the UK.
The talents of innovative artist Manfred Kielnhofer have not been unknown to EYES IN Magazine. Editor-in-Chief Vivian Van Dijk had the great pleasure to interview him; the results were published in Issue 9. – See more at EYESIN.com.
Kielnhofer was featured in Issue 9, not yet available in digital versions.
Source: Festival of Lights and Manfred Kielnhofer
For more innovative art, subscribe to EYESIN.com and follow @EYESINMagazine.
– See more at: http://www.eyesin.com/art/2013/time-guardians-visit-berlin-festival-lights/#sthash.w2Wnq2Uu.dpuf